Costa Rica will have a pro-market president in May 2022

Two pro-market candidates will compete in the second-round contest

Firms should start revamping their government engagement playbook in Costa Rica to get ahead of policy disruptions stemming from the tax reform and government spending adjustment that will be implemented by the incoming administration. While the country is preparing for the second-round presidential election on April 3, between former President José María Figueres and a former finance minister and World Bank economist, Rodrigo Chaves, the key item firms should be paying attention to is how the incoming administration will handle Costa Rica’s high debt amid the ongoing recovery after the COVID-19 fallout. 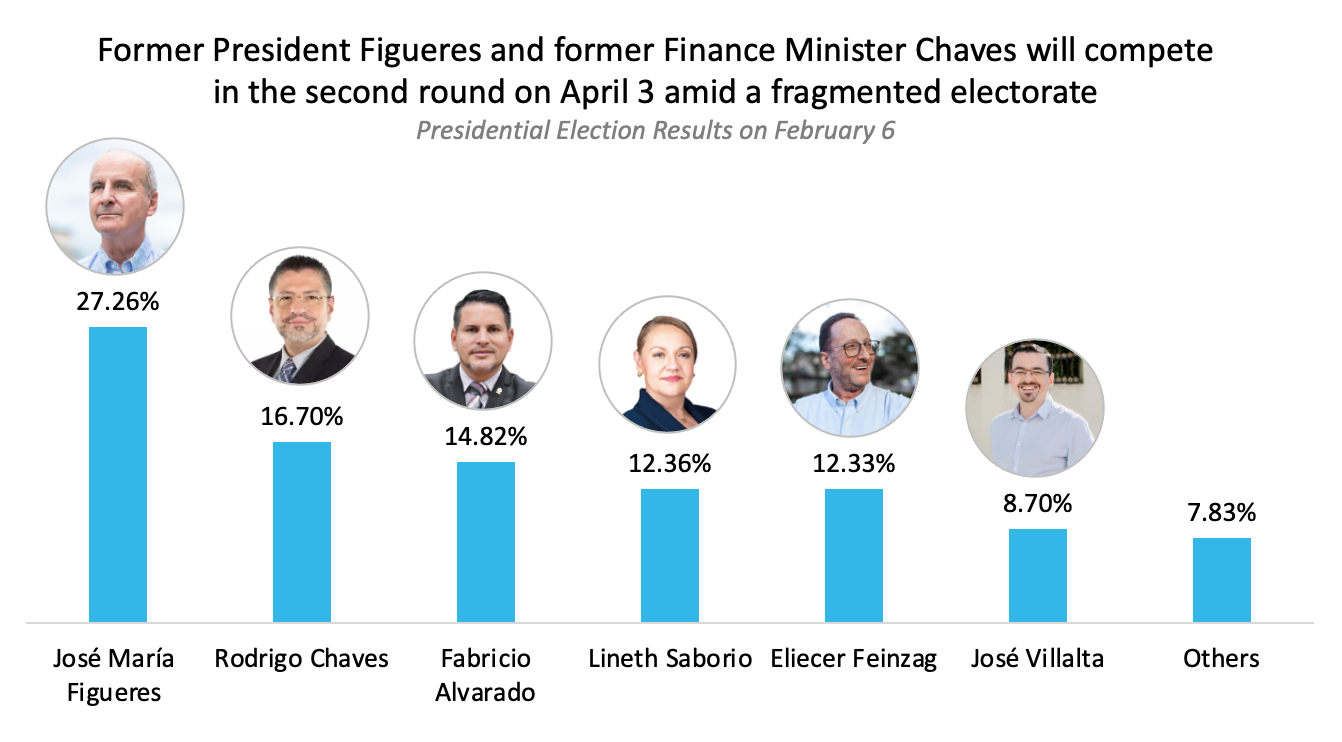 Costa Rica held its first round of the presidential election as well as legislative elections on February 6. At the presidential level, former president Figueres (1994–1998) of the Partido Liberación Nacional (PLN) and Chaves, of the Partido Progreso Social Democrático (PSD), were the winners of the first round, with the former obtaining 27.26% of the vote and the latter 16.70%. Figueres and Chaves are center-right candidates, thus firms should expect a pro-market President to take over in May. Yet, the main issue is how either a Figueres or Chaves administration will deal with the fiscal deficit and mounting public debt. Currently, Costa Rica has a public debt of 71.2% GDP, which has led to the country losing its sovereign rate.

Figueres’ economic plan can be described as pro-market with a preference for green energy and a willingness to cut regulations to improve Costa Rica’s operating environment. Figueres proposes the creation of 200,000 new jobs in the first two years of his administration, aiming to curb the high unemployment (around 15%) that has affected Costa Rica for the last four years. Moreover, as part of his green energy platform, Figueres is proposing to phase out gas and oil exploration in Costa Rica via a constitutional amendment, while curbing CO2 emissions by half.

On the other hand, Chaves’ economic plan aims to increase government revenues by modernizing customs, streamlining state services while eliminating bureaucratic barriers, and helping shore up the key tourism sector. Chaves was—for a brief period—the minister of finance of the outgoing Alvarado administration, from which he resigned due to serious differences with President Carlos Alvarado over the need for local governments to adhere to the fiscal rule enshrined in the Ley de Fortalecimiento de las Finanzas Públicas approved in 2018. This bill aims to rationalize public spending in Costa Rica and set a cap on spending for all public institutions, except for local governments. This exception was included in 2019, prompting the exit of Chaves from the Alvarado administration.

Costa Rica will have a pro-market government in May 2022, regardless of who wins the presidency on April 3. Thus, the main policy trend that firms should track is how the new administration will implement the IMF agreement amid budget constraints. To that purpose, either a Figueres or Chaves administration will need to strike deals with another fragmented Congress that came out from the February 6 election. Figueres’s party, the PLN, is likely to obtain 18 out of the 57 seats of the unicameral Congress. Chaves’s party, the PSD, will likely obtain only nine seats. Consequently, the new administration will need to work with the opposition to implement its plans, as no party won an outright majority. At this point, former President Figueres is better positioned to win, as he is likely to build a broader coalition. However, Chaves could win the second round if he is able to secure the support of Fabricio Alvarado, the ultraconservative candidate who finished third with 14% of the vote, as well as bring more people to the ballot box, because around 40% of the electorate did not vote in the first round—meaning there are a lot votes up for grabs for the second round. With the race now narrowed down to two candidates, and Chaves with momentum after entering the second round, he could defeat Figueres if he is able to secure the support of Alvarado and galvanize parts of the electorate who are fed up with Costa Rica’s political establishment, represented in this election by Figueres.