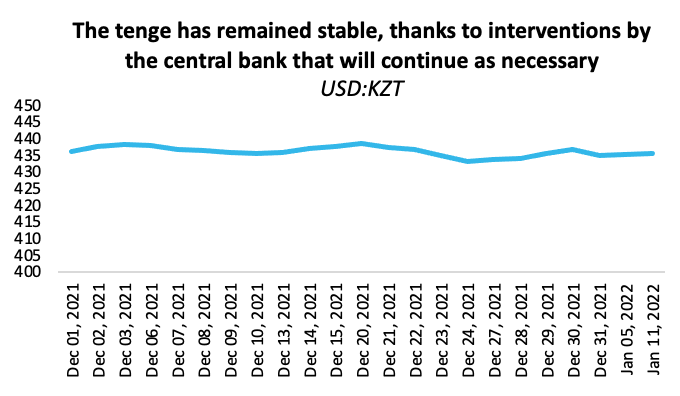 Despite restrained sentiment, the tenge remains stable, and no sanctions are expected

The fallout from Kazakhstan’s turmoil has been mild thus far on the business environment: domestic banking activity and stock markets were temporarily suspended, and bond prices rose in reaction, while oil output was briefly cut. Firms can expect consumer and business sentiment to remain restrained until the political situation stabilizes. More positively, however, the tenge has remained protected and stable, and the government is likely to raise social spending, increase utility subsidies, enact measures to slow price growth, and initiate some reforms to offset anger over a continued tight crackdown on protest activity. In addition, no sanctions are expected.

On January 2, major protests erupted in the western city of Zhanaozen over a doubling of the price of liquified petroleum gas following a removal to the subsidy. Despite immediately putting LPG prices back below even the earlier levels, the protests snowballed into mass demonstrations against the government across the country, with crowds shouting, “Old Man Out,” in reference to ex-President Nursultan Nazarbayev, who still retained control of the country after leaving official office in 2019.

Violence erupted, leaving some 164 people reportedly dead and up to 10,000 arrested, with numerous government buildings set ablaze and the nation’s main airport in Almaty briefly seized by protesters.

President Kassym-Jomart Tokayev called in troops from the Russian-led Collective Security Treaty Organization (CSTO) to stabilize the situation. He also removed Nazarbayev from his role as head of the Security Council, as well as the prime minister, cabinet, and Nazarbayev loyalist and intelligence chief Karim Massimov (who was later arrested). The Nazarbayev family fled the country, with Nursultan Nazarbayev’s whereabouts currently unknown.

The situation remains very fluid, with elite infighting ongoing discreetly as Tokayev seeks to install loyalists into key state roles amid pushback from Nazarbayev’s clique. However, while the Nazarbayev clan has lost considerable political power, the remaining oligarchs associated with Nazarbayev retain control over the nation’s primary economic and financial assets as well as influence over factions of the military, portending a contentious future and threats to political stability in the upcoming months. To that end, Russia’s involvement—and apparent support for the future of the Tokayev regime—will continue to benefit the stability of the country, though at a cost. The Tokayev administration, assuming it survives the near term, will be plagued with having sacrificed the nation’s sovereignty and inviting in Russian and other regional troops, generating discontent from the population and elites alike. More positively, reforms promised by Tokayev will become necessary to implement as a matter of sustaining control over the country, potentially aiding the investment environment.