Talks continue between the West and Russia

Despite increased likelihood of a diplomatic solution, a Russian invasion is still relatively probable

As before, firms have contingency plans in place for an escalation in various hybrid warfare tactics by Russia against Ukraine, which will now incur increasingly harsh sanctions by the West. In this downside scenario, with sanctions announced against top Russian officials, Nord Stream 2, and Russian sovereign debt; export controls on advanced technology; and—depending on the severity of the sanctions—bans on dollar transactions by top state-owned banks, plan for the ruble to reach 80 to the US$, with central bank interventions to mitigate further depreciation. Under a base-case scenario of extended negotiations and persistent hostility, the ruble should average ~76–77 to the US$, causing more inflationary pressure and higher interest rates for longer, weighing on demand notably. 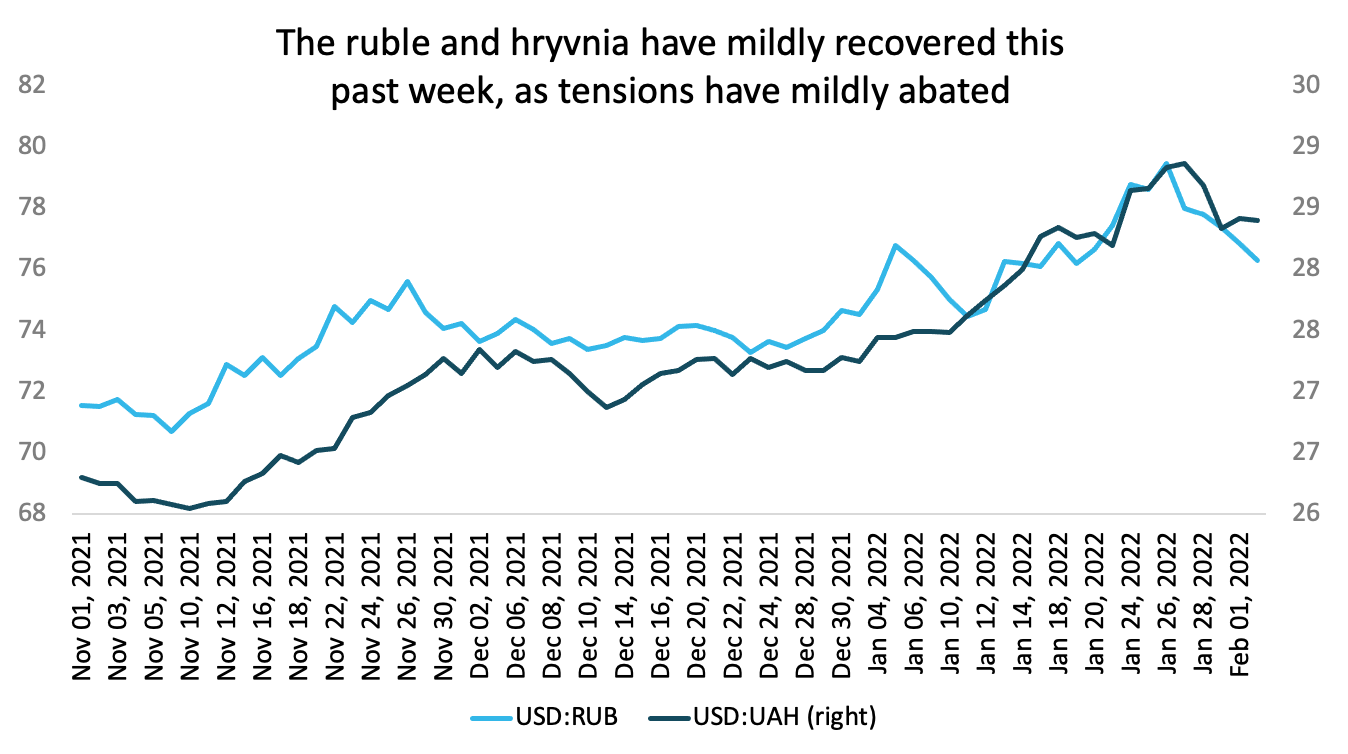 Following numerous high-level discussions between the US/West and Russia over the course of January, the US provided the written reply Moscow sought related to its demands regarding NATO and Ukraine. In the letter, the US failed to concede to Russia’s core demands, most notably vowing to keep Ukraine out of NATO, and reiterated the Western position earlier communicated publicly. As of this writing, Russia had replied to the US letter, though the details were unclear, while top Russian officials have again denied plans to invade Ukraine and demonstrated an interest in pursuing further dialogue to resolve the crisis, including the proposal for another Putin-Biden meeting. Russian, German, French, and Ukrainian emissaries in talks in Paris elicited a shared interest in a ceasefire in the Donbas and promised to meet in two weeks to further discuss the matter. The West has become more unified in its stance toward Russia, with several countries providing more military assistance to Ukraine as well as funding, while the US, UK, and EU have become increasingly aligned on a strong sanctions response should Russia invade Ukraine. The ruble and hryvnia have improved mildly over the past week after having weakened notably and consistently for the previous month.

This past week was critical to better understanding Russia’s plan and intention for resolving the crisis, as Moscow could have chosen to pursue a military solution following the disappointing US reply to its demands, but instead has delayed and reiterated interest in further diplomacy—a positive step amid the deep acrimony. Assuredly, the increasingly unified position of the West against Russia in terms of a sanctions response and greater support for Ukraine has had an impact. Events of the past week have increased the likelihood of a diplomatic solution to the crisis, whereby via protracted negotiations this year the Kremlin can still achieve most of its core demands, claim a diplomatic victory in having had a say in the future security order of Europe, and have a face-saving exit from the crisis with its prestige in tact. However, these next days and few weeks will reveal in which direction the crisis is heading, with a Russian invasion still relatively probable (~40%). While Putin would not want to invade while in Beijing this week and distract from China’s hosting of the Olympics, Russia will have the personnel and materiel in position by February 10, when joint Russian-Belarusian military exercises will take place along Ukraine’s border.