Leftwing coalition Apruebo Dignidad and center-right Chile Vamos elected their candidates for the November 21 presidential election during the presidential primaries on July 18. Amid record levels of turnout, both primaries delivered unexpected results. On the left, former student protest leader and legislator Gabriel Boric secured 60.4% of the vote, overtaking Communist Party candidate Daniel Jadue (39.6%), who was well ahead of Boric in the polls. In the center-right Chile Vamos primary, former social development minister and independent candidate Sebastián Sichel defeated rightwing favorite and current mayor of Las Condes Joaquín Lavín with 49.1% of the vote to Lavín’s 31.3%.

Markets rallied as Chile’s electoral authorities released the results of the primaries, particularly as Boric is likely to position himself as more of a moderate candidate than Jadue. Sichel’s nomination also soothed investors, as the young politician has called for keeping Chile’s economic model in place. Still, Chile’s election is far from decided. Both Boric and Sichel are likely to face challenges from candidates who did not run in the primaries but can still launch their bids before the August 23 deadline. Potential contenders include Socialist Party candidate Paula Narvaez and Senate President Yasna Provoste, who is currently polling above both Boric and Sichel in electoral scenarios run by CADEM. 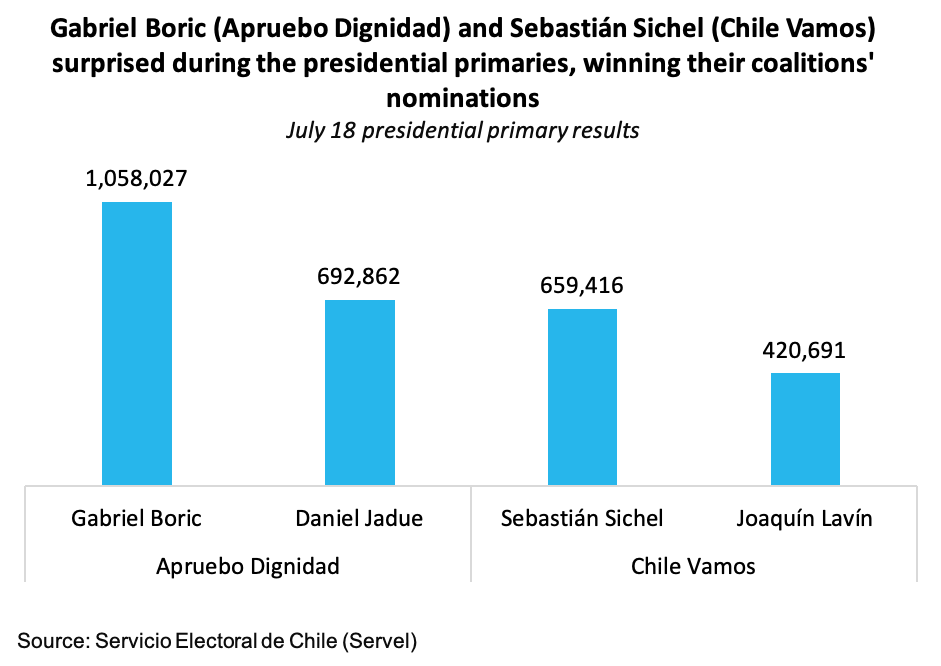 We anticipate a victory from the left or center-left in the election, with Boric likely to take the presidency, particularly if Provoste does not launch a bid. The primaries echoed similar trends from recent Chilean elections, with voters not only shifting left—Boric secured around 37.7% more votes than Sichel—but also largely favoring relative political newcomers ahead of establishment candidates.

Firms should closely monitor political developments ahead of the presidential election, keeping a close eye on announcements surrounding new coalitions or additional bids, particularly from the center-left, which could shake up the political environment. Additionally, firms should track Boric and Sichel’s efforts to position themselves ahead of the presidential election, particularly their stances on key political topics that are top of mind for the Chilean public, such as the constituent assembly or pension reform.

At FrontierView, our mission is to help our clients grow and win in their most important markets. We provide the research, data, and insights you need to outperform the competition. Subscribe to our weekly newsletter The Lens published by our Global Economics and Scenarios team which highlights high-impact developments and trends for business professionals. For full access to our offerings, start your free trial today and download our complimentary mobile app, available on iOS and Android.