Devastating floods have torn across large swaths of western Germany (as well as Belgium, the Netherlands, and Luxembourg), killing more than 180 people. As the damage is surveyed, the cost for rebuilding and emergency services is likely to total in the billions of euros. With the September 26 national election looming, the issues of climate change mitigation and adaptation have surged to the forefront. Most major politicians have attributed the flood devastation to climate change. The Christian Democratic Union (CDU) has taken blame for an inadequate federal response, and Armin Laschet, the party’s candidate for chancellor, was caught laughing on camera when visiting the affected regions. Despite the Green party’s climate focus, chancellor candidate Annalena Baerbock has been careful to avoid being seen as profiting from the tragedy. 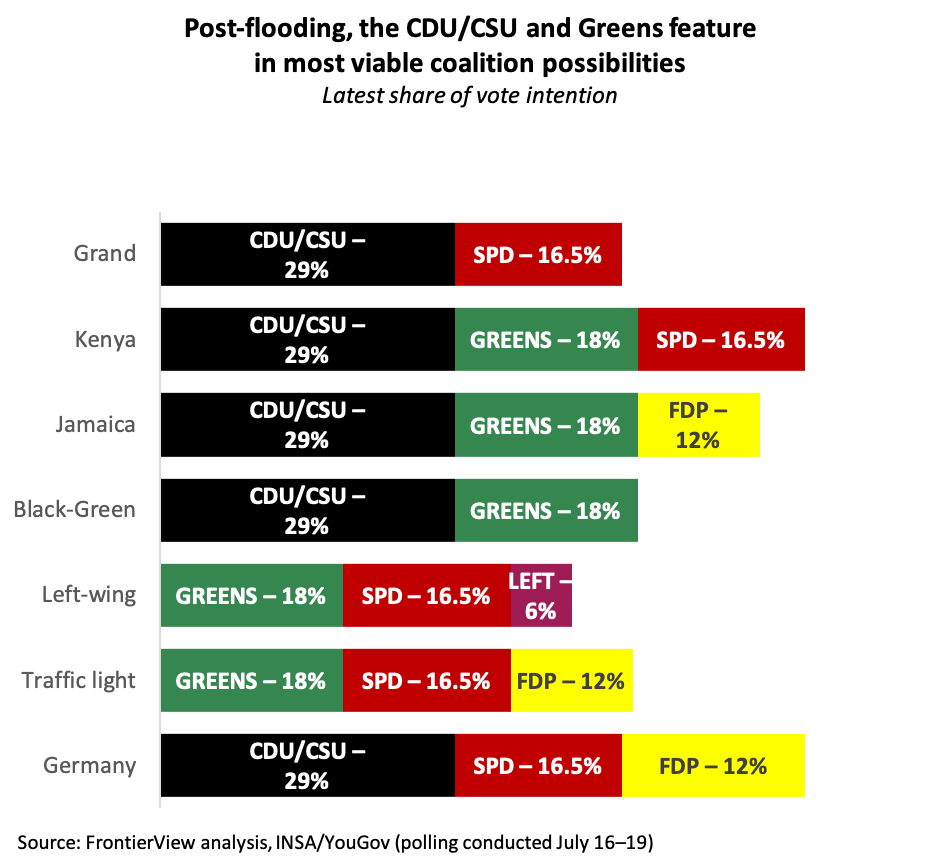 Although the floods have caused serious infrastructure damage and loss of life in areas of North Rhine-Westphalia and Rhineland-Palatinate, the impact on overall German economic activity is mild, and Germany has the budget capacity to provide sufficient aid to affected regions. The bigger impact of the floods is on the election campaign, where climate change has suddenly become a major focus. Overall, we anticipate a modest increase in the Green party’s vote share following these events. Despite missteps by the CDU, we also expect the party’s emphasis on pragmatic governance to prevail in an atmosphere of uncertainty and vulnerability. Although the CDU will be attacked for its unambitious climate policy, it has already steered debate toward the need for competent crisis management. As a result, the probability of a CDU-Greens (‘Black-Green’) coalition following the September election has increased, though other coalition possibilities remain in play.

The issues of climate change and sustainability are taking on ever-increasing importance in German politics, but the CDU’s resilient popularity means that policy changes in the areas of environmental regulation and green infrastructure will be measured and slow. However, the increasing likelihood that the Greens will be part of the next governing coalition means that MNCs should pay close attention to how proposed climate change policies and the evolution toward a carbon-neutral economy will affect their operations. Firms that are less carbon-reliant and more localized stand to benefit from increased government support.

At FrontierView, our mission is to help our clients grow and win in their most important markets. We provide the research, data, and insights you need to outperform the competition. Subscribe to our weekly newsletter The Lens published by our Global Economics and Scenarios team which highlights high-impact developments and trends for business professionals. For full access to our offerings, start your free trial today and download our complimentary mobile app, available on iOS and Android.