Trust in the constituent assembly has declined in 2022

Firms should brace for continued instability in the Chilean political arena, even as President-elect Gabriel Boric takes power in March. It will be important to continue to monitor Boric’s stance on the new Constitution. To date, Boric has been widely supportive of the constituent assembly, but as president, it is likely he will be under significant pressure to compromise with the opposition, particularly given Chile’s congressional fragmentation, which narrowly favors the right. Pressure from Boric and rising popular distrust of the assembly could lead to some moderation within the institution, as a scenario where the new Constitution does not pass could be highly destabilizing, particularly from a social unrest standpoint. Regardless, firms should brace for a turbulent couple of years. Even if the Constitution is approved in the exit referendum, implementation will be challenging under a fragmented Congress, leading to persistent political and regulatory instability in Chile. 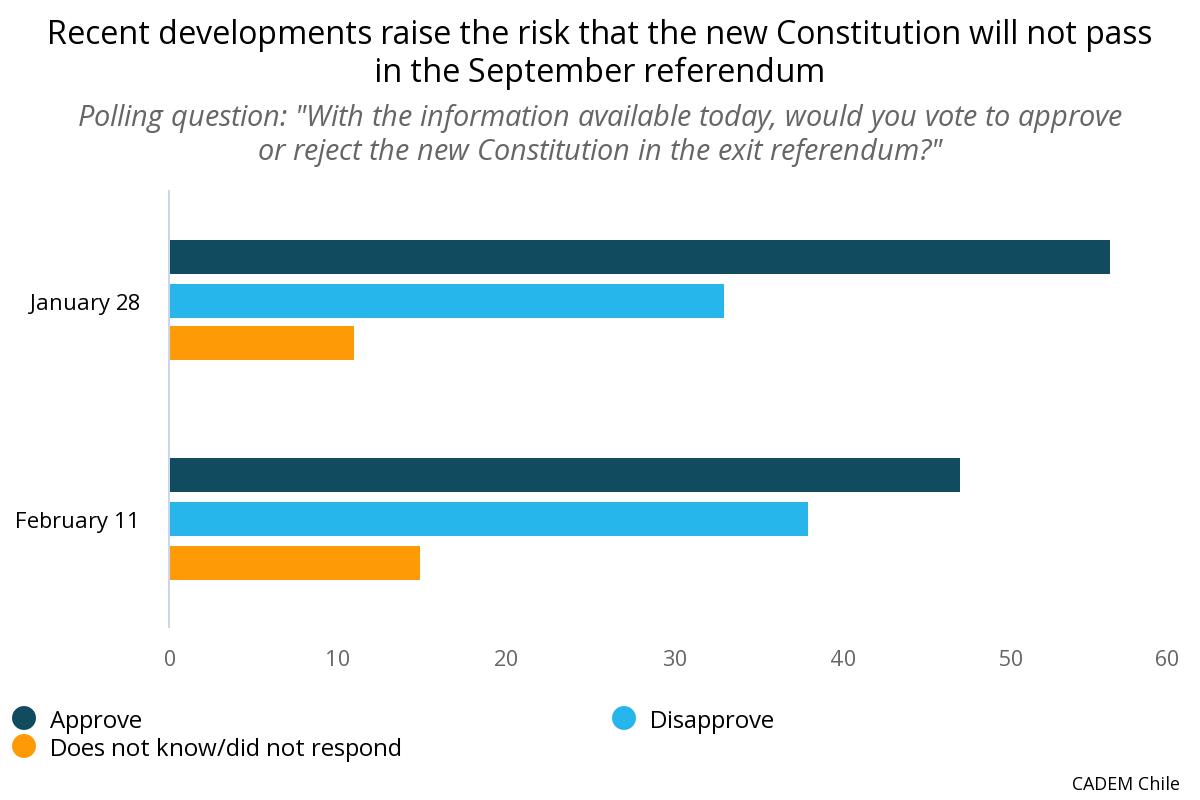 Polls suggest that support for Chile’s new Constitution may be dwindling, as popular trust in the constituent assembly that is drafting the new Constitution declines. In a recent CADEM poll, only 47% of respondents stated that they would vote to approve the Constitution in the exit referendum at the end of the constitutional process. This is down from 56% support in January. Additionally, overall trust in the constituent assembly fell to 50% this month after ending 2021 at 58%. Declining support is likely tied to the assembly’s recent progress on key constitutional articles. Several of the constituent assembly commissions have voted on article proposals on important topics ranging from the mining sector to Chile’s political system itself. Some of the proposals approved in committee raised alarms over the past few weeks, including an article that would nationalize Chile’s copper and lithium sectors, and another that would replace the country’s bicameral Congress with a unicameral structure. These draft proposals are likely to be modified as they make their way through the constituent assembly, as they will need to secure two-thirds support on the floor. While the constituent assembly is dominated by left-leaning independents and other more traditional left-wing factions, these groups are unlikely to vote in unison, and therefore each article will require negotiation and compromise. Additionally, the final draft of the Constitution will need to be approved in a nationwide referendum at the end of the constitutional process, which will require a simple majority to pass.

When the constitutional process kicked off in early 2020, close to 80% of voters expressed support for rewriting the 1980 Constitution. The Constitution was widely expected to pass in a nationwide referendum, but an unexpected leftward tilt to the constituent assembly raised concerns that approval could become more challenging. While our view is still that the new Constitution will be approved in the exit referendum later this year, the recent early approval of proposals largely viewed as radical by the median Chilean voter significantly increases the risks of a “no” vote. If the Constitution does not pass in the exit referendum, Chile would automatically revert to the 1980 Constitution, which a majority Chileans voted against in 2020, raising the risks of social unrest that echoes the 2019 protests.